Home » Making a Difference in the Lives of the Hungry and Unsheltered: National Civilian Community Corps Team Deploys to Tacoma Food Bank

Making a Difference in the Lives of the Hungry and Unsheltered: National Civilian Community Corps Team Deploys to Tacoma Food Bank 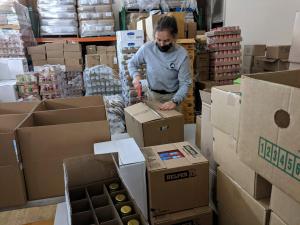 TACOMA—Alexis Shepardson looked out the window of the van as the driver pulled into a spot beneath a bridge one afternoon in late October. The driver honked the horn. Immediately, people emerged from tents.

Soon all Shepardson could see were people crowded around the van, eager to receive the boxes of food and hygiene items she and her team packed earlier that morning.

“We spent 20 minutes just giving out food,” Shepardson, 18, said. I think I’ve seen so much more need than I ever have before in that short period of time.”

Delivering boxes and backpacks filled with food, gloves and hygiene products to people experiencing homelessness and food insecurity are just some of the tasks Shepardson and a team of eight other AmeriCorps National Civilian Community Corps, NCCC, members have been fulfilling for Eloise’s Cooking Pot Food Bank in Tacoma since they were deployed from California in October.

AmeriCorps NCCC is a full-time national service program that allows young adults between the ages of 18 and 26 to serve on teams that are deployed to sites across the country to address critical needs in communities. NCCC Teams across the Pacific Region (serving Washington, California, Oregon, Idaho, Utah, ‘Nevada, Montana, Hawai’i and Alaska) deploy for a total of 10 months for projects ranging in length from six to 12 weeks. Teams deploy to non-profit organizations, government agencies, schools and universities as well as Native American Tribal Councils. Types of service projects can include environmental conservation and stewardship, infrastructure improvements, urban and rural development, energy conservation and disaster preparedness, mitigation, recovery and response.

Currently, the Making a Difference Foundation provides 750,000 pounds of food to approximately 27,000 people a month, according to Parth Singh, assistant program director for the NCCC Pacific Region.

“In our country, due to the pandemic, food insecurity, like in communities doing this work, is recognized as a systemic disaster,” said Singh, who helps select service project sites for NCCC. “The need is even bigger than I had anticipated.”

The NCCC team at Eloise’s will serve until Dec. 20. However, Singh is working to get a second team deployed to continue the project.

“AmeriCorps NCCC members make a tremendous difference,” Blue said. “We feel blessed to have the opportunity to utilize this resource to help us serve our community with food and hunger-related services. Volunteers like AmeriCorps members not only help fill in critical gaps in our ability to maintain our programs but also to build capacity to meet increased community needs. Their service is valuable and it’s an honor to have them at our food bank.”

Shepardson, who is originally from New York City, said the opportunity to serve in NCCC came a time when she needed to feel connected. After a year of attending school online, she decided to postpone her college plans and serve in AmeriCorps.

“I was feeling useless, being stuck at home and feeling like I wasn’t really contributing that much to society,” Shepardson said. “But what I can give is time and this seemed like a way to have a highly social, impactful year.”

Shepardson is still exploring what the next step will be after AmeriCorps. She’s considering careers in environmental science or working in the non-profit sector. She says her experiences since she began serving have made her more aware of the world around her.

“It’s been impactful talking to all the people we serve,” Shepardson said. “We are in a global pandemic and there are so many people who have lost their jobs and are food insecure. I realized any one of us could end up on the streets. Going up to people’s doors, it was really incredible seeing people being so happy, just to be able to prepare a meal, because of what we’re doing.”

A proud member of