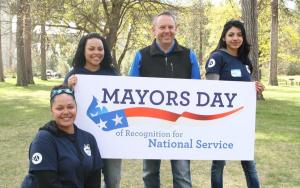 Spokane, WA – In recognition of his strong support for national service, Mayor David Condon will receive the Local Leadership Award from Voices for National Service, a diverse coalition of national and local service programs, state service commissions and individual champions, who work to ensure Americans of all ages and backgrounds have the opportunity to serve and volunteer in their community.

The Local Leadership Award is given for leadership and innovation in leveraging national service to meet local needs.

The awards will be formally presented in Washington, DC at the 14th Annual Friends of National Service Awards on February 14, 2017. Click here to see the full list of award winners and details regarding the event.

Debbie Schuffenhauer, Executive Director of Serve Washington said, “Mayor Condon is a local leader who understands the positive impact service has in creating healthy and resilient communities and has shown his support by making it a priority for his administration. The Spokane Gives initiative, which he started in 2014, expanded on the region’s strong philanthropic belief in service and volunteerism. Mayor Condon invited residents to be a part of this movement because he knew that service and volunteerism encourages compassion, has a positive impact on the quality of life, and it is the foundation for building a caring community where people want to live and raise their families.”

“Mayor Condon has been a champion for national service and community volunteering and an invaluable partner in pressing for critical federal funding,” said AnnMaura Connolly, President, Voices for National Service. “He has never hesitated to roll up his sleeves and serve alongside local national service members – whether participating in service projects with the Spokane Service Team and Habitat for Humanity or collaborating with other Washington State mayors to clean up the Spokane River. In recognition of his unwavering support for national service and community volunteering and in acknowledgment of his efforts to target national service resources to address pressing local needs, Voices for National Service is proud to honor Mayor Condon with the Local Leadership Award.”

National service is a cost-effective strategy for engaging citizens, improving communities and strengthening the nation. In communities across the country, national service members of all ages and backgrounds provide critical services to fulfill unmet needs. National service members tutor and mentor struggling students, help Americans lead healthier lives, provide job training and other services to returning veterans, preserve the nation’s parks and public lands, offer disaster relief and recovery assistance after natural disasters and support independent living for seniors and Americans with disabilities. For every federal dollar invested in national service, there are returns to society of nearly four dollars in terms of higher earnings, increased output and other community-wide benefits.

Congress created the Corporation for National and Community Service (CNCS), the federal agency that oversees national service programs such as AmeriCorps and Senior Corps, to be a public-private partnership that invests limited federal dollars to leverage substantial private investment and improve lives and communities. In 2015, CNCS generated $1.26 billion in outside resources from private businesses, foundations, and other sources, an amount exceeding the federal appropriation.

Furthermore, a recent survey of AmeriCorps alumni found that eight out of 10 alumni say AmeriCorps benefited and advanced their career path, and that AmeriCorps alumni are more likely to attain a bachelor’s degree or higher than the average American adult.

The 14th Annual Friends of National Service Awards is sponsored by Comcast NBCUniversal and CSX.

Voices for National Service is a diverse coalition of national and local service programs, state service commissions and individual champions, who work to ensure Americans of all ages have the opportunity to serve and volunteer in their community. Founded in 2003, Voices for National Service has built strong bipartisan support among our nation's leaders and helped to elevate national service as a powerful strategy for tackling unmet needs, preparing young people for work, uniting our country and developing civic character.

A proud member of